Whatever you do, don't think you've got it all figured out.

This refrain would erupt, by chorus even, when people came and went from my life.  It seemed like the first thing people wanted to tell me, is that I suppose I know too much.  I could see it in their eyes before anything came from their lips.  I, do, for that matter, suppose to know too much, and I got this far quite squarely on that accord.

It didn't ever seem clear to me what people meant when they snipped my beak off like this.  I knew they were trying to displace my worldview with their ill-defined Gaussian blur prospectus on freedom and purpose, which I supposed was put into circulation for their own good – when you look at anything too close it starts to drive you insane, and most people can't see too well to begin with.  Now we all shovel numbers and narratives, though.  You all asked to play like this, and you knew I wrote the book on it.

You must have heard me, clearly, when I detailed this serpent colostomy you would be undergoing when you traded your ordinary idea of existing in for agile docusheet management and feelings charts.  I knew you wouldn't hear me any other way, because this is the sort of horseshit you understand from NYU and your diversity and inclusion workshops.

Shouldn't I know too much?  Most people I had ever met either seemed to want to know more or to not care about knowing at all.  And so I would choose to know too much.  Should I pretend to know too little?  Perhaps.  I won't be learning anything unless I convince myself I don't know enough.  Everywhere I look is garbage I'm supposed to buy or believe, which keeps me at bay.  There's some quintessence to the way we perceive rules and order that makes it revolting to pay too much attention to them.  Really, it makes you want to set it all on fire, or enrapture the entire world in an unshakable rogue empire.

I won't let myself have it all figured out, though.  I know you all need your little sneakers and white gold, some Tinkertoys for your other other girl.  Let me worry about keeping the lights on and smacking the gong when the new princess phones come out. 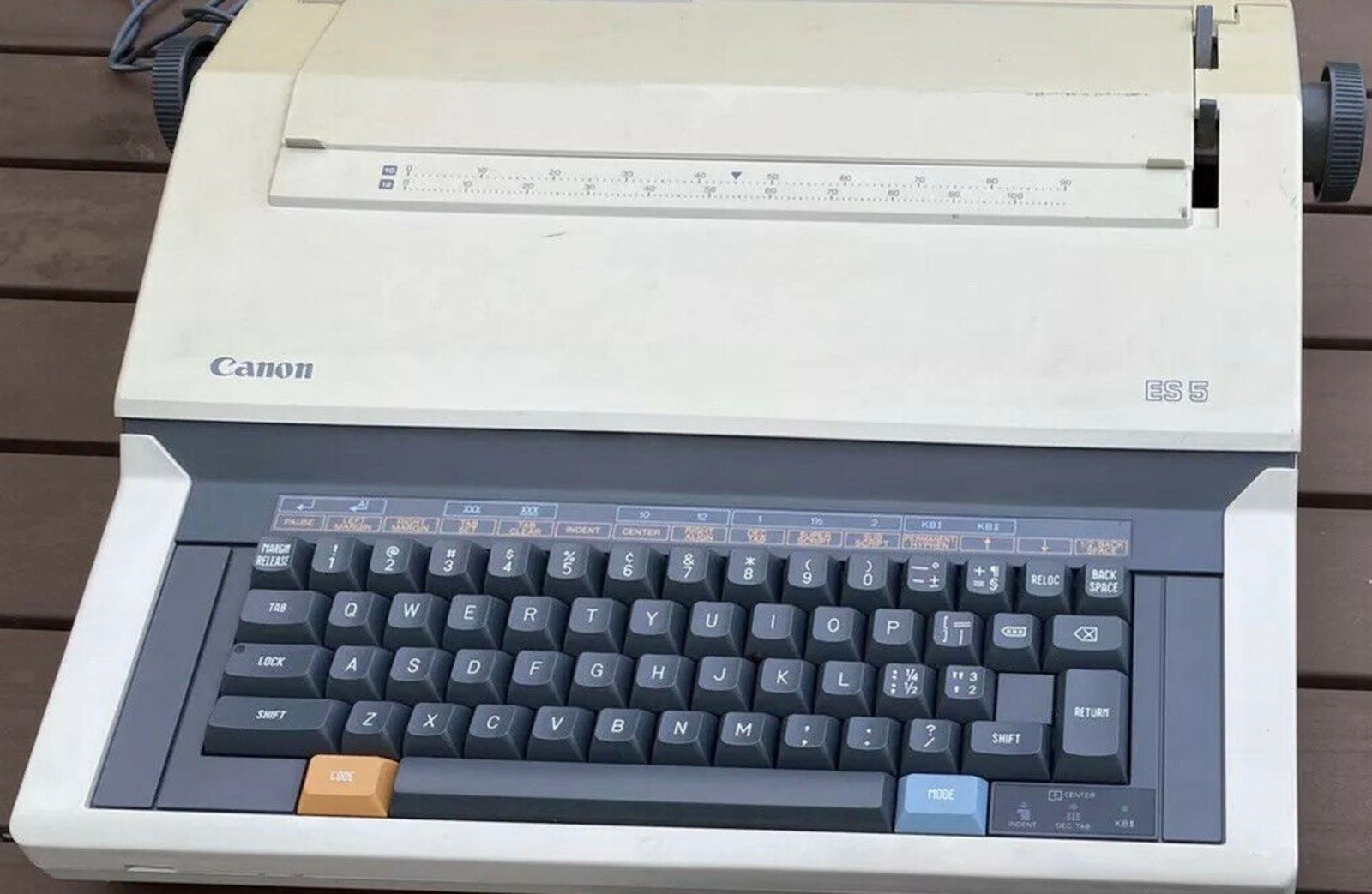 This is an electronic typewriter, which means there's a carriage that moves left to right automatically, with a wheel of metal dies for letters and a cassette of ink, programmable margins, and automatic carriage return (return meaning "new line").  This is unlike mechanical typewriters, where you had to reset the carriage with a lever, or bulky electric typewriters that had a traditional motor and complex mechanics.  These were more modern, microprocessor controlled typewriters with a stepper motor controlling the carriage.

These compact typewriters are relatively slow; the ones that can keep up are way too bulky, and are really only meant for an office.  Mechanical typewriters had physical limitations to how fast you can type, because the arms that the keys control will get crossed up, and the electronic ones that are suitable for a home office are really only able to hit around 75WPM.  As you type, a buffer will fill up while the typewriter tries to keep up with your typing, which is kind of fun.

Many typewriters had underline and programmable tabs, which would have come in handy for laying out pages or filling out documents.  Some even had bold.  Character spacing was often adjustable, as was line spacing.  You could also change out the metal element or arms used for striking letters against the ink ribbon to get different typefaces.  Backspace used a special correction tape, moving the carriage back one character and hammering an adhesive tape on the letter to remove it.

Later, there would be word processor typewriters which had small displays and allowed you to edit your writing before printing it out to the page, line by line.  These typewriters were popular throughout the 80s and 90s, before computers and word processing software took hold.  Canon, Casio, and others also sold ultra-compact word processing typewriters that were actually just thermal printers, like a receipt printer or a fax machine.  It printed one line at a time to the page, silently, using a thermal element.  This allowed for more complicated typesetting, because it could print however many different styles and symbols that the engineers could fit in the firmware, or on a removable typestyle cartridge. 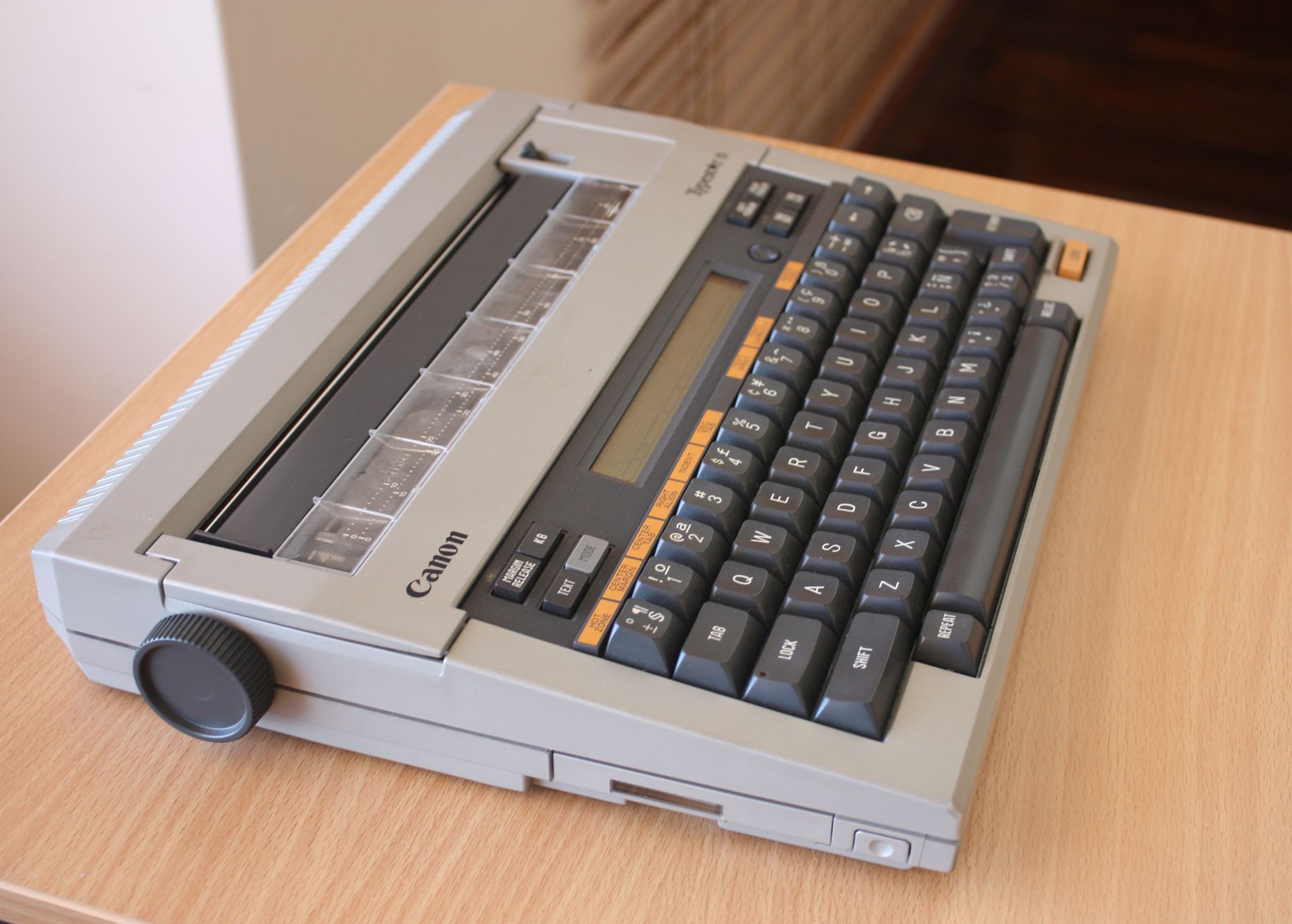 These typewriters are very low profile and quiet, but the thermal printing doesn't hold up like traditional ink.  It wears much like receipt paper; in fact, receipt paper and fax paper is what people use in these because you can't get a hold of the original thermal typing paper.  I wonder if there are more durable materials for thermal paper available today.

Quicker than writing, and not wired up like my computer.  Huh.